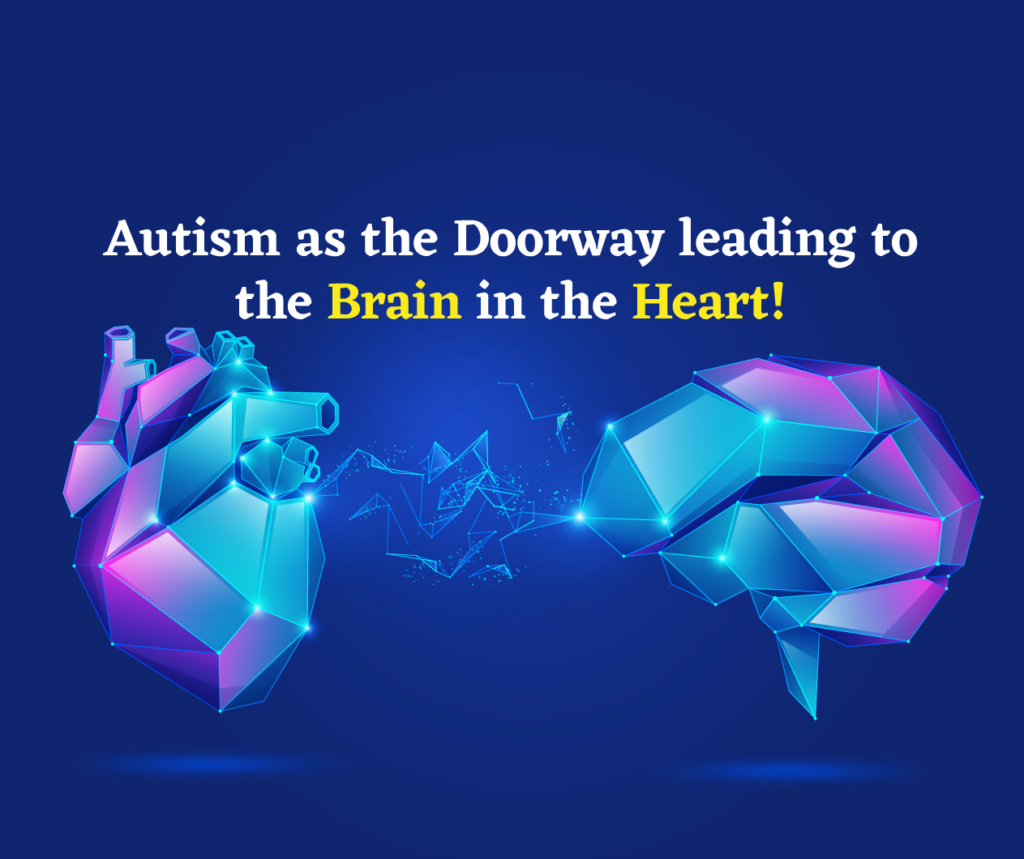 Autism as the Doorway leading to the Brain in the HEART: Part 1

When I repeatedly state that Autism is the next stage in Human Evolution, I am met with confused reactions/responses from the “neurotypical majority” ( the “majority” status of the neurotypical segment of the population is fast eroding with autism statistics skyrocketing worldwide as a largely predicted but ignored reality)

In this article, I endeavor to help ease the understanding of this statement from a seemingly abstract level to hopefully a more tangible level.

Let’s see how this goes …

WHY is autism on an explosive rise especially over the past decade or so ( those wondering if autism is indeed on the rise can read this article  for the latest perspective  on the Autism Challenge: https://authenticautismsolutions.com/are-you-ready-for-the-next-big-wave-after-covid-19-welcoming-the-autism-wave-on-world-autism-awareness-day-2021/ )

While I have addressed this question in a multitude of ways earlier, in the context of understanding this statement “Autism is the next stage in human evolution”, my answer is this – Autism has been on the rise in direct proportion to the disproportionate premium placed on the illusionary advantages of the “thinking mind” thus relegating the Timeless Wisdom and Infinite Intelligence dormant in the HEART to the back burner.

Dormant, because your heart is waiting on you to be AWAKENED into your power with “time-tested” practical Insights that offer you an evolutionary advantage above and beyond its inherent survival benefits. This, the majority of Humanity is unaware of!

In simple terms, Autism is on the rise due to existing and operating ( robotically or in a calculated manner) from the “Neurotic Mind” level, completely disconnected from the Brain in the Heart.

Now, SCIENCE is catching up with this FACT about the Human Heart’s POWER that is literally incomparable to the often fear and competition-based neurotic responses of the “human mind”. What science now states is that there is a network of sensory neurites in the heart that functions independently of the brain in the skull and has access to information that the brain in the skull does not have and cannot process the way the heart is capable of accessing and processing and leads you to take Inspired Actions.

(Dr. Armour, in 1991, discovered that the heart has its “little brain” or “intrinsic cardiac nervous system.” This “heart brain” is composed of approximately 40,000 neurons that are alike neurons in the brain, meaning that the heart has its own nervous system. In addition, the heart communicates with the brain in many methods: neurologically, biochemically, biophysically, and energetically. Ref Pubmed article)

Actions that serve your well-being and evolution in a way that only your heart can.

Where does Autism fit into all this?

Autistic beings are inherently wired to function from this Brain in the Heart, which is one of the reasons they are the next stage in Human Evolution.

Not only that, the autistic brain can be re-wired through the heart and to know the Neurocardiology basis of this phenomenon is explained in this article; https://authenticautismsolutions.com/are-you-ready-for-the-next-big-wave-after-covid-19-welcoming-the-autism-wave-on-world-autism-awareness-day-2021/

The heart is the portal to Infinite Intelligence. Intelligence which is intensely personal and specific too, while being infinite and expansive at the same time. This is the seeming “paradox” of the human heart’s intelligence. Paradox for those who are choosing to distance themselves from the Eternal Truth of invariably ALL wisdom traditions on the planet that have survived tremendous challenges since humans first recognized themselves as a species on this planet.

And that Eternal Truth is this – There is no “other”.

That is precisely what science has discovered as the EMF (electromagnetic fields) from the heart radiating outward from each human and intertwining with the EMF of EACH human on this planet.

How far does each human’s heart’s EMF radiate? Well, this is limited by the human mind’s ability to device instruments to measure the same beyond approximately five meters as of now.

Now, there are two ways to LIVE your life from this moment forward, IF you have read the above statement and understood its implications and/or given yourself permission to register these FACTS within your “mind” so to speak. Because, you cannot escape the fact that YOUR Heart resonates with this Truth as you already KNOW this to be the Eternal Truth!

Coming to the two ways to live, one is either you learn to listen to your heart, or the other is you exit this planet by “heart attack”, oftentimes with a shortened lifespan. The increasing rates of heart attacks in modern civilization bear testimony to the price of ignoring the messages from your heart s brain.

What do you think?

Are you listening to your heart s intelligence?

Autism Today: The Spectrums within the Autism Spectrum Disorder

Are you ready for the next big “wave” after COVID-19? Welcoming the “Autism Wave” on World Autism Awareness Day 2021

Get the latest autism related knowledge articles delivered to your inbox for free.