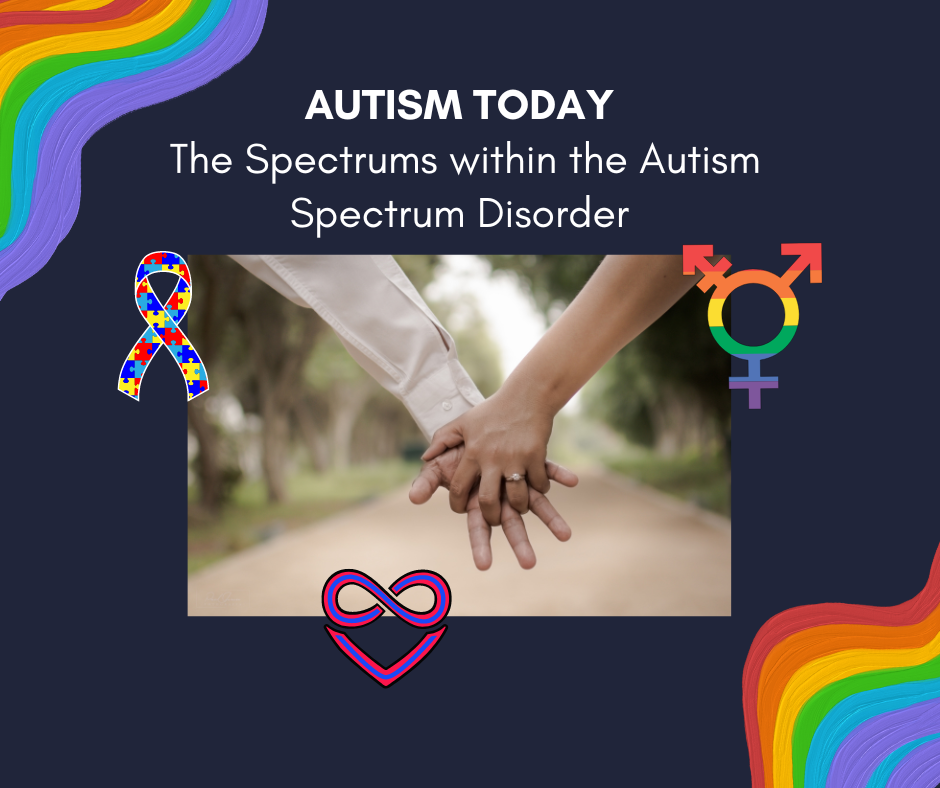 Autism Today: The Spectrums within the Autism Spectrum Disorder

Reading Time: 4 minutes
Autism Spectrum Disorder or ASD is now a term that most people are familiar with.
The other terms that flow into our news feed regarding autism are  Mental health, Gender, Sexuality, and Relationships issues in some form or the other.
The question is –  how many are aware that these terms are in fact the Emerging Spectrums within the Autism Spectrum and not necessarily conditions existing on man-made islands of their own?
What are these spectrums?
1)LGBTQIA+ in ASD
2)Schizophrenia and other additional mental illnesses in ASD
3)Polyamory
Consider this – 78% of autistic children are diagnosed with at least one mental health condition and almost 50% of autistic children have two mental conditions or more  ( https://www.news-medical.net/news/20210119/Study-shows-high-prevalence-of-mental-health-conditions-among-children-with-autism.aspx )
As for the LGBTQIA + Spectrum, when I first wrote this article on the Unisex Brain a few years ago, I had no idea the sexual challenges in autism would diversify rapidly into a rainbow spectrum that is still a classification in progress. With the plus sign testifying to the same: https://authenticautismsolutions.com/wp-content/uploads/2015/07/Unisex-Brain.pdf
In recent times Polyamory is trending as a spectrum including terms such as “open relationships”, “situationships” and more terms being coined faster than one could even try to attempt to understand the existing ones.
Polyamory is no surprise considering the fact that LGBTQAI + is the primary spectrum and this is an offshoot of the fluidity and dynamics that relationships in the LGBTQIA +spectrum paves the way for.
The paradox with polyamory though could be the fact that “neurotypical” people too practice it and so it is not necessarily limited to the spectrums category.
But the difference usually is this – Polyamory, when practiced by autistic beings invariably comes from a state of being of lack of Energy Boundaries while the same in “Neurotypical” individuals usually comes from a place of wanting to “explore pushing the boundaries”. Autism, by definition is an Energy Sensitive state of being. At the lower frequencies the limiting symptoms dominate and at the higher frequencies, the gifts and talents bloom. The challenge is in learning to stay more and more consistently in the higher frequencies so one can Thrive,free from the limiting symptoms. Coming back to these spectrums within the Autism Spectrum, attempting to “understand” these spectrums with your mind could be challenging to say the least.
The only way to make ” sense” of these spectrums within spectrums is by asking yourself – Am I on one or more of these spectrums?
Because, paradoxically, every human being and not necessarily an autistic being alone is facing an identity crisis never before seen in the recent history of mankind!
The only way you can remain sane while trying to decide on an approach to this conundrum of spectrums is by anchoring yourself in the knowing that is now cemented firmly by the discoveries in quantum physics, which is the fact that we are ALL Energy Beings.
Well, let’s start with the basics – masculine and feminine energies. Not too threatening to admit and accept?
Good. That’s a relatively comfortable place to start from.
Even though what these terms “masculine” and “feminine” means and represents varies again depending on the cultural context among many other factors.
Now expand on these Energies to include more in your vocabulary and suddenly these spectrums begin to feel less overwhelming to explore and hopefully “get it” on some level.
Not necessarily “understand”.
We are nowhere near that yet as all of these spectrums are Fluid, Evolving and Dynamic !!
Here is an exercise that could help.
Answer these for yourself:
Are you able to see where this is going?
Well, nowhere as of now!!
Therefore, anything that is fluid evolving and dynamic comes under a “spectrum”.
Add  the term “unique” to the mix and voila, we now have a new breed of humans who are unique and yet fall on some spectrum or the other!
Is this just a breed or is it a sea – change in the entire character and characteristics of the human species literally at sea regarding their very identity ??
The questions are numerous and right now the Only answer that can help navigate ALL these spectrums is recognizing and more importantly knowing and allowing oneself to live and thrive as Energy beings and beings of Energy.
And the rock solid way to know this is by becoming aware of your “state of being“. To know more about all these terms you can explore this link: https://authenticautismsolutions.com/decade-autism-cure-success/?related_post_from=27482
Which brings us to the ONE factor that gives a double edged sword advantage to people on the autism spectrum by default, and and which “Neurotypical” people struggle to wrap their heads around as this factor cannot be “intellectually understood” using their NT brains, so to speak.
It can only be Experienced and integrated at a cellular level.
And that factor is Energy Sensitivity and navigating this world using this inner GPS.
This inner GPS can be accessed only by learning to inhabit your body first.
And becoming familiar with Knowing and Being rather than deliberating intellectually deducing and coming to conclusions.
More pragmatically, finding the balance between the two.
Which is why these spectrums within spectrums exist today – to help us find the point of balance and then move through the spectrum in any direction along a persons life span on this New Earth.
Time for a question now:
WHO are you?
Wait a minute.
WHAT are you?
There is only ONE person in any relationship with an autistic person. You.
Because, the autistic being invariably reflects who you are in relationship to who or what you are becoming.
You have only one choice.
To evolve or to perish.
Maybe there really is no choice – if you have survived the pandemic, the way ahead is only evolving  towards discovering your unique place on the spectrum!
Because, Autism is the New Normal.

Are you ready for the next big “wave” after COVID-19? Welcoming the “Autism Wave” on World Autism Awareness Day 2021

Get the latest autism related knowledge articles delivered to your inbox for free.